We had an amazing holiday event on Friday December 5th !! An amazing group of vendors from our partners, Juice Served Here to Neova skincare all came together to treat our guests to their unique services and beautiful wares. Attendees enjoyed healthy snacks from Paleta Foods while getting dolled up for the holidays with Cashmere hair Extensions and All Tressed up! The beauty and shopping extravaganza ended with dancing and music provided by DJ Castro!
Thank you to all of the vendors and guests that attended!! We hope to continue the traditions next year!! Happy Holidays!!

Does 17 year old Kylie Jenner need to ask her mom’s permission to get lip injections?

How to Get the Best Results from Your Injectables

There’s a secret to getting the best results from injectable wrinkle treatments like BOTOX®, JUVÉDERM® and RADIESSE®. The single most important factor for getting the safest, most beautiful and longest-lasting outcome is pretty simple: selecting a skilled and experienced injector.

The widespread popularity of these treatments and the array of non-medical spas in which they are administered may make it tempting to think of them as simple cosmetic solutions like eyebrow waxing or pedicures. However, injectables are safe and effective only when administered by skilled medical experts in a sterile, professional environment.
A 2013 study published in the ISAPS Aesthetic Plastic Surgery found that with the exponential growth in providers administering these injectable treatments, some key changes are required to ensure patient safety. Unless and until such changes occur, the only way to ensure that your results are beautiful, safe and with minimal complications or risk is to skip the day spa and seek a medical-grade facility staffed by skilled injectables experts.

Looking your best is a worthwhile goal, and injectable fillers and wrinkle treatments like BOTOX® offer impressive results with little downtime. But don’t make the mistake of downplaying the gravity of injectable treatments by trusting your skin to just anyone. In order to get the most beautiful results, put your focus on finding a skilled, experienced and highly trained injector rather than on looking for bargain-basement BOTOX® parties or other non-reputable providers. Health is everything, so make safety your priority, and seek a surgeon-supervised setting for your injectable anti-aging treatments. 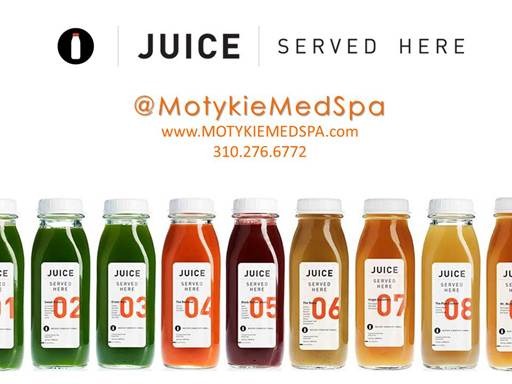 This organic detox program is at the cutting edge of raw and superfood nutrition. JUICE Served Here takes your average juice cleanse to a new level by featuring the tastiest, most nutrient dense juice and offering the option of  a raw soup and a superfood bar into your regimen. Not only is it deeply regenerating and alkalizing, but also it tastes delicious and is completely satisfying.

Did you know that sun damage is the number one cause of premature facial aging, and protecting skin from the sun’s damaging rays is as important in winter as it is during the dog days of summer? Keep your skin looking youthful and beautiful all year round with these sun protection tips.

About 90 percent of skin cancers are caused by overexposure to the sun’s UV rays. Even in winter, it’s important to use a quality sunscreen to shield your skin from the sun, whether you keep it cool in Southern California or hit the slopes for winter sports. If skiing is your fancy, you’ll need to slather up even more carefully: the combination of high altitudes and white reflective snow on the slopes makes winter sports potentially dangerous propositions for the skin.

To take your winter skin protection a “shade” higher, be sure to cover up with a good hat and other protective clothing to shield skin from the sun’s rays. Look for a wider brim to shield your face, neck, décolletage and shoulders from aging solar exposure.

So you’ve gotten smart about sun damage now, but what about existing damage from your sun-loving years past? Laser skin resurfacing treatments and the intense pulsed light (IPL) photofacial are excellent solutions to target sun-related skin damage like wrinkles, sunspots, irregular pigmentation and broken capillaries with little to no downtime.
Sunlight is essential for our health as it’s a crucial factor for producing vitamin D, but moderation is the key. Protect your skin with the steps above for a beautiful, youthful complexion for years to come.

Watch the video to learn more:

iS Clinical offers effective and technologically advanced treatments for aging and acne-prone skin. Using only the best active ingredients, iS Clinical is able to thoroughly rejuvenate the complexion while clarifying, balancing and nourishing.
iS Clinical combines the art of healing with the science of skin care to create a unique approach in skin health. With a carefully assembled team of renowned pharmacologists and physicians, iS Clinical researches and develops leading cosmeceutical skin care products, designed to provide unique and highly efficacious care. By dispelling the myths around skin care and addressing many issues at their root causes, iS Clinical helps to remarkably improve the appearance of the skin, creating a smoother, brighter and healthier looking complexion.

Dr. Gary Motykie, a board-certified plastic surgeon and featured doctor on Dr. 90210, established The Healing Curve, a charity to provide reconstructive surgery for breast cancer survivors. The focus of this charity is to address the needs of women who do not have insurance covering breast reconstruction after cancer surgery.
“I started The Healing Curve to help those women who have won the battle against breast cancer but have been left feeling incomplete in the process,” says Dr. Motykie, whose practice in West Hollywood includes an on-site surgery center and comprehensive med spa. “These women have already been through so much with cancer itself, and they deserve the best possible breast reconstruction that plastic surgery can offer.”

The Healing Curve’s first goal is to offer the highest standard of reconstructive surgery and follow-up care to women who cannot afford it. Dr. Motykie and his team are working to build a nationwide cause that will give these women hope and build a support network for them to complete their journey. Ongoing steps to build awareness include alignment with other charities and partnerships with other doctors who appreciate the worthiness of the cause.
In addition, the charity recently participated in the “Women Who Rock” Event on October 13 at the Hard Rock Hotel in Las Vegas. Proceeds from ticket sales and a silent auction were donated to the charity.

Not long after founding The Healing Curve for women who have survived breast cancer, Dr. Motykie recognized that the charity could reach beyond these women as well. Because the charity is all about recreating a sense of wholeness following trauma, it can also help survivors of other physical deformities from causes ranging from other cancers, trauma and accidents, or serious illness.
“I initially performed the first breast cancer surgeries on the Dr. 90210 television series because I felt that people needed to see what hope and joy plastic surgery is capable of bringing to patients,” adds Dr. Motykie. “After the shows aired, the letters came pouring in, each story different, but with one common theme: a physical deformity and no means to correct it. These patients were not only left disfigured and scarred; they were oftentimes left with no means to pay for a quality revision surgery.”
If you are interested in The Healing Curve program and would like to learn more, please contact us.